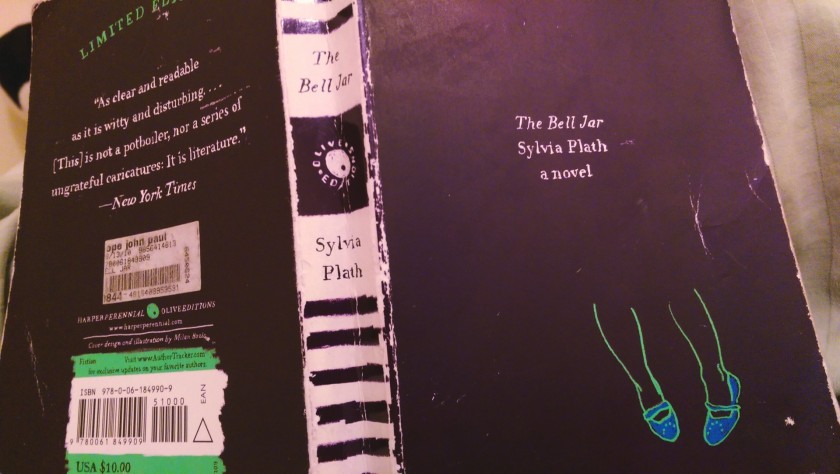 This book has been on my shelf for years. I’d never known what it was about, but I knew it was the only novel written by famed poet Sylvia Plath, therefore I knew I had to read it. I’m a fan of Plath’s poetry, though you don’t have to be to enjoy this book (I use the word enjoy lightly).

This book is in one word insightful. Sharp, personal, and emotionally charged— her poetry leaves an impression on you in its willingness to be vulnerable, and this book is no different. If you’re familiar with Plath, you know that her poetry strikes a raw chord because she wrote from a deep and painful place in the heart and mind. She suffered from depression for many years before ending her life at the age of 30, leaving two children, a boy and a girl, behind.

Though a work of fiction, The Bell Jar, like Plath’s poetry, is considered autobiographical because of its deeply personal perspective on life behind the veil of depression. The central themes in the novel, I found out later, parallel those in Plath’s early life. In fact, she is said to have referred to The Bell Jar as “an autobiographical apprentice work which I had to write in order to free myself from the past.” As a writer, I truly connect with the desire to purge your pain through writing, or at least, to seek to understand it.

But The Bell Jar is not outward with its purpose. It doesn’t come out and say, hey, this is what depression is about! This is what it feels like! Nor is this book explicitly about Plath herself. It doesn’t seek pity. It does, however, whether you’ve suffered from depression or not, challenge you. It most certainly makes you question— whether it’s Esther, the protagonist, her reasons for doing, thinking, and saying the things that she does— or yourself, and your own deepest, darkest human moments.

The first-person narrative, brutally honest and morbidly critical, grips you immediately. And I could see as I read why 19 year-old Esther Greenwood has been compared to The Catcher in the Rye’s 16 year-old Holden Caulfield. I won’t go into an in-depth comparison, but I will say that like Holden, Esther is not immediately likable. I wasn’t quite sure what to make of her and her seemingly judgmental observations at first. She raised my eyebrow many times, especially in the beginning as I was just getting to know her, and only until I read further did I realize that her perspective was muddied by something else…

“A summer calm laid its soothing hand over everything, like death.” Sylvia Plath, The Bell Jar

This book is about perception. About disconnectedness and alienation, with very subtle threads of hope. The tone is never melodramatic; poignant in its straight-forwardness, in its matter-of-fact attitude towards death, it drips with despair but not obviously. Written by a poet, the prose is unsurprisingly fluid and the figurative language is wonderful and plenty. Plath was a word smith indeed. The way she so easily weaved tender and difficult emotions into a needle’s eye was a pleasure to study!

The Bell Jar is a vivid, intelligent, and disturbing portrait of a determined, witty young woman whose perception of herself and the world around her is blurred by something she can’t quite place. It gives voice to an uncomfortable subject, a human experience that, especially at the time of its publication in 1963, was not widely and openly talked about— let alone from a woman’s perspective.

In fact, Plath didn’t want the novel published in the U.S. for fear that it would cause pain to those close to her (many of the characters were apparently inspired by people in her own life). So it was published first in London (where she lived at the time) under the pseudonym Victoria Lucas, and not released in the U.S. until 1972.

I think Plath intrigues us because she was a mind too heavy for herself, too deep for her own good. And the Why in her life’s off-course, tragic end, and the bleeding words she left behind, haunt us.

In a way, this book— a fleeting peek into a mind off kilter — sheds some light, though it doesn’t promise to answer any questions. What it does do, however, just as it did when it was first published, is spark conversation and foster awareness around mental health.

Have you read The Bell Jar?

2 thoughts on “Review: ‘The Bell Jar’ by Sylvia Plath”